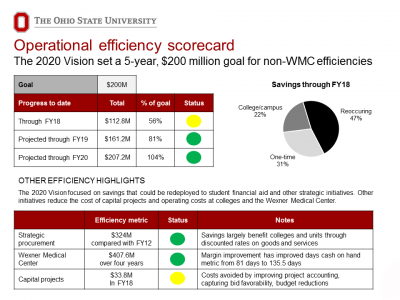 Operational excellence and resource stewardship is a key element of the university’s Time and Change strategic plan.

The university’s scorecard, which was presented to the Board of Trustees last month, shows that the university is on pace to surpass the efficiency goal by 2020 and has already surpassed the other five-year goals — more than a year early.

Below is a status report on each area:

This progress reflects the university's commitment to being a responsible steward of its resources, as do separate savings from strategic procurement, in the capital project process and at the Wexner Medical Center.